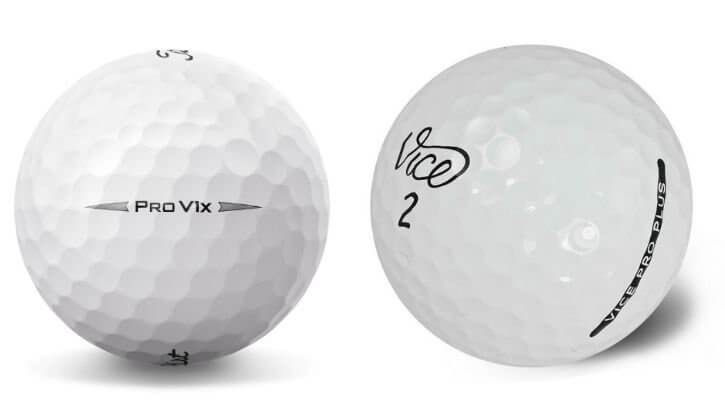 There has been a flood of new golf ball companies coming into the market over the past few years. Some of them are complete garbage but a lot of them are quite good. In this post, I’m going to be comparing the Vice Pro Plus golf ball to the Pro V1X from Titleist and talking about which one you should be playing.

How did they compare? Using a driver, mid-iron, and wedge, we found both of these golf balls to be very similar. I don’t know what the compression is on the Pro Plus but I’d say it’s slightly less than the Pro V1X. With the driver, the Pro V1X was around 5 yards longer on average. The numbers with a mid-iron were essentially the same while the Pro V1X had slightly more spin with a wedge. The Pro Plus is quite a bit cheaper as well, especially if you buy in bulk.

If you don’t mind sacrificing a bit of distance with your driver and a bit of spin with your wedge, then why not give the Pro Plus a try? Everything else was very similar and for me, the extra cost isn’t worth it. For some people, it could be so that’s really going to come down to you. Continue reading or watch the video below for the full details.

One of the main differences between these two golf balls is how they feel at impact. The compression of these balls is pretty similar in my opinion but I don’t know for sure what number is because they don’t have it on their website.

If you’ve ever hit the Pro V balls then you’ll know the V1 is softer than the V1X. The Pro Plus ball from Vice is more like the Pro V1 and is a bit softer than the Pro V1X. That’s one of the main differences between them.

The next thing we’ll talk about is the quality of these balls. When I say quality I’m talking about how long they last and how quickly they get scuffed up. Both of them aren’t that great which is a bit unfortunate.

They’re pretty fragile balls and if you consistently make solid contact you’ll go through a good number of them. The Pro V1X balls are pretty expensive and that’s one of the main reasons I wouldn’t play them but the Pro Plus is quite a bit cheaper and even more so if you buy in bulk.

With the driver, most of the numbers were very similar between both balls. Ball speed, launch angle, spin, and dispersion were all too close to pick a winner. I’m not saying that’s going to be the case for you but from our testing it was.

The one main difference between them was the distance. For me and my swing, the Pro V1X was around 5 yards longer on average. It’s nothing to brag about but I’ll take any sort of extra yards I can get.

With a mid-iron, the numbers were quite similar again and there was only one noticeable difference. The distance, ball speed, launch angle, and shot dispersion were all really close (yardage was almost identical).

The only real difference I could see was with the spin. If you’re an average player then this probably won’t matter anyway but for some people, it could be important. From our testing, the Pro V1X ball had just under 1000 RPM more than the Pro Plus.

It wasn’t enough to impact distance or ball flight but it could give you a little more stopping power on the green. This isn’t something that matters too much to me but it’s what a lot of people are looking for.

With a wedge, it was a little bit different than the rest because all of the numbers were essentially the same. All of the stats were slightly different but they were close enough to call it a tie. They could be a bit different for you though.

Again, the numbers could make a difference to some players but for me, it didn’t really matter. Some people want the most spin possible for stopping the ball on the green while others want a bit less. The choice is up to you.

Overall, both are good golf balls and are suited for a specific player. Other balls on the market fit my game better but the Pro V1X is one of the most popular balls out there for a reason. If you’re sick and tired of spending a fortune on them and are fine losing a bit of distance and spin then why not give the Pro Plus a try.

Everything else was pretty much the same with all three clubs but the big difference is the price. A dozen Pro Plus will be around $13 cheaper than a box of Pro Vs. If you do buy 5 dozen Pro Plus then the price drops by quite a bit. All in all, I’d say to give them a try and see for yourself. Some people won’t like them at all but a lot of people have made the switch.